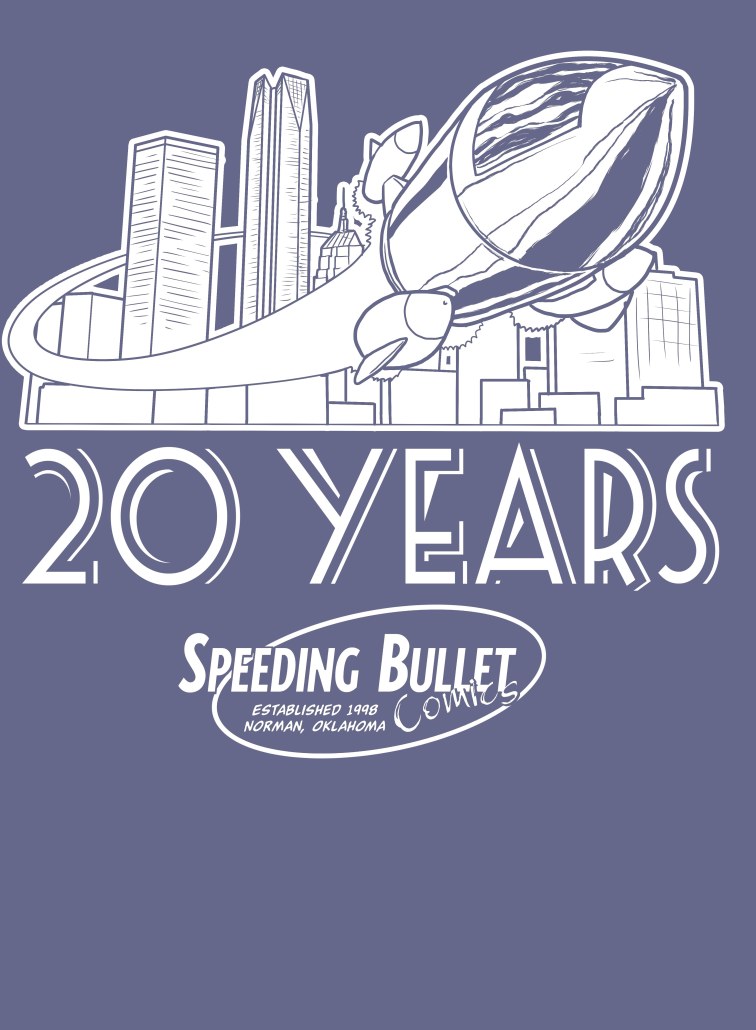 Speeding Bullet Comics, 614 N. Porter Ave., will celebrate 20 years of serving the Norman community with an anniversary party on July 14.

Signings, giveaways, sales and more will mark the occasion. Event hours will be from 10 a.m. to 7 p.m. July 14 at the shop.

All Day: 20 percent off all back issues!
All Day: Buy two get one free on toys and posters!
Spend $50, get a 20th anniversary T-shirt!
Enter drawings for prizes all day!

“We are so appreciative to the people of Norman for supporting us for 20 years,” said co-owner Matthew Price. “And we’re so honored that local comic readers have chosen to make us part of their lives, in some cases across multiple generations.”

Speeding Bullet hopes that this year’s celebration will be even more than meets the eye.

“Transformers” fans will want to stop by to have a chat with former Marvel Comics editor and letterer Jim Massara, who worked on Marvel Comics version of the title. Massara is also a veteran animator, penciller and inker. He’ll be on hand from 2 p.m. to 5 p.m.

“We are always glad to celebrate those who have worked for the larger comic publishers who have Oklahoma ties,” co-owner Matthew Price said. “We’re pleased to welcome Jim Massara on this big anniversary for us!”

Comic book writer/artist Jerry Bennett will return to Speeding Bullet Comics for the anniversary. Bennett is one of the artists of the comic-book story “The Grave,” written by Speeding Bullet Comics’ Matthew Price. The pilot film based on the Grave screened at this year’s deadCenter Film Festival in Oklahoma City and is on its way to Comic-Con International in San Diego.

Bennett has worked on sketch cards for many big licenses in recent years, including “Star Wars” and Marvel Comics. Coming up later this year, he will provide sketch cards for an official “Stranger Things” card set. Bennett will appear from 10 a.m. to 2 p.m. at the shop. Bennett also created the art for the official Speeding Bullet Comics 20th anniversary T-shirt.

Kent Clark — in fact, his real name — is also on hand to celebrate 20 years of Speeding Bullet Comics. Clark, whose illustration of “The Grave” was recently featured in Oklahoma Contemporary’s exhibit on local comics, has drawn comic books for Looking Glass Studios, Equinox Comics, Gray Haven Press, and InDELLible Comics. He’s also worked on Marvel Comics characters through the Upper Deck card company. Clark will sign from 4 p.m. to 6 p.m. on July 14.

Matthew and his wife Annette, both University of Oklahoma graduates, formed Speeding Bullet Comics in 1998, after purchasing the assets of Millennium Books, which itself had followed the Norman location of The Archives chain of stores.